There have been many metaphysical belief systems throughout history. Such a fact tells us that none are commonly accepted. We all know about the religions of the world but the metaphysical philosophies are not as well known. The most established metaphysical philosophy is based on particulars and universals. This is an idea that goes all the way back to Aristotle and still continues today. It leads to an argument about realism vs. nominalism or, in other words, is reality true in substance or in name. However, the words particulars and universals are primarily adjectives. Although they are being used as nouns, perhaps there are better words out there that aren’t adjectives. Another metaphysical philosophy is Schopenhauer’s idea about will and representation. This idea states that we can’t actually know reality, we can only know a representation of it, and everything in reality has its own will. He wrote this in a long book which is interesting to read but, frankly, it’s difficult to accept that everything has its own will. A more modern metaphysical philosophy is called Object Oriented Ontology which believes that all of reality is made up of objects. It leads to an explanation about real objects and sensual objects as well as real qualities and sensual qualities. This philosophy says that objects should be for each other, not necessarily for humans. From this sample of metaphysical philosophies we can tell how profound they are and what they are trying to do. Of course not all philosophies can be accounted for here but at least we have an idea of what history has given us.

The metaphysical philosophy presented here is based on subjects and relations. The word subject has the highest scope of all words. Anything we want to discuss is a subject. Courses in school are called subjects and topics of conversation are called subjects. That is why for metaphysical purposes the word subject is the most appropriate. More than one subject combined together is a relation. Therefore, relations are composed of subjects. The subjects within a relation are known as being relative to one another. Relative subjects are either higher or lower (or equal) to each other. Relations themselves can be subjects. This leads to a self-referential phenomenon. Subjects and relations can be related in the same subject. As the word subject has the highest scope of all words, the subject of subjects and relations is therefore the highest of all metaphysical philosophies.

If we left this philosophy as it is, there is not much more to say. However, if we introduce the concept of happiness in it, the whole world opens up to us. What we do is say that happiness occurs if subjects combine and form a relation. Alternatively, unhappiness occurs if related subjects separate into unrelated subjects. From this modification this philosophy can now incorporate the phenomena of family, logic, games, humor, music and morality. Furthermore, all of the emotions can be defined in it. This philosophy now becomes very large but then that is what we should expect from the highest of all possible subjects.

We all refer to our family members as relatives. This is of course a universal fact. The members of our families are connected to each other because there was a combination. They are related together and are therefore intrinsic subjects. The family name is the extrinsic subject. We use the word relative because, for example, siblings are relatively closer to us than cousins. This applies to animals and plants as well.

The most important terms in logic are right and wrong. Right is if an intrinsic subject is within an extrinsic subject. Wrong is, of course, if it is not. It is also important to know that the inverse of right is possession. Whatever is in one’s possession is in its rightful place. Also, in English, we have the word proper which is a synonym for right and the word property which is a synonym for possession. To give a simple example for this, we can use the statements, “Dogs chase cats. Fido is a dog. Fido chases cats.” Fido is intrinsic to dogs. As dogs chase cats Fido must also chase cats because Fido is intrinsic to dogs. If we say, “Does Fido chase cats?” we can now say that is right. Another example would be, “Is Houston in Texas?” We’d say yes, that is right. Houston is intrinsic to Texas even though it doesn’t have to be.

Humor is not as complex as one might think.  There are three types of humor: primary, secondary and leverage humor.  Primary humor is primary happiness done acutely.  It occurs when subjects from two completely unrelated extrinsic subjects combine together.  In general, the farther apart the extrinsic subjects are and the more quickly the combination occurs the funnier the humor is.  For example, given the joke, “When is the best time to go to the dentist”?  The answer is 2:30.  Here, the time, 2:30, is combined with the phrase, tooth hurty.  The combination of a time of day and a reason to go to the dentist, coming from completely unrelated subjects, triggers the humor.

Secondary humor is an exaggeration of secondary happiness.  It occurs if we get a relatively higher answer than what we would expect.  For example, we’ll use the common question, “How far away are you”?  An answer such as, “a million miles away,” would be an instance of secondary humor.  It should be noted that the near infinite amount of available dimensions for relations makes this type of humor extremely varied.

The third type of humor, leverage humor, comes from a subtype of secondary happiness, leverage happiness.  Leverage happiness occurs when a related subject gets relatively lowered.  This causes the other subjects in the relation to be relatively increased.  This is very common.  We can see it in the example, “Hey bonehead, how’s it going”?  If the people involved know each other, related in some way, then it’s funny, it’s leverage happiness.  If they don’t, it’s insulting.  This type of happiness is risky because it flirts with hate.  In order to inhibit hate we say, “only kidding.”

The general definition of morality is not doing something for cognitive reasons what one impulsively would want to do.  Morality in terms of subjects and relations stems from two axioms.  They are called the league rule and the base rule.  The league rule states that an intrinsic subject can never be related to an extrinsic subject.  In other words, one should not have a relationship with an extrinsic subject, an employer for example.  The other rule, the base rule, applies to morality both non-physically as well as physically.  Non-physical examples are repeated jokes are not funny, time doesn’t rhyme with time, and redundancy is pointless.  Physical examples won’t be presented here but they are easy enough to figure out by oneself.

Being able to account for family, logic, games, music, humor and morality is not what any other metaphysical philosophy is capable of.  Why the subject of subjects and relations has eluded us in history probably has to do with its self-referential nature.  Even though it has no functional utility, metaphysics affects the direction of society.  Imagine if Aristotle would have written about this philosophy in his book, “Metaphysics.”  There never would have been a creation/evolution debate that took 2000 years to surface.  Anyone who understood subjects and relations would simply say, “we know already.”  The resources society spends on this issue in terms of defense and security is astonishing.  All of that never should have existed.  It all depends on what belief system one has.  On account of us already referring to family members as relatives, we already use subjects and relations.  It therefore is already true.  It just has never been published before.

⦁ Procedures are relations in time.
⦁ Games are competitions for secondary happiness.
⦁ There are only three options: empaty, apathy and antipathy.
⦁ Related subjects are antipathetic to each other but empathetic to each other in the presence of other relations.
⦁ All emotions occur after an event with the exception of the anxiety emotions.
⦁ There are two things to know about leverage happiness: it only works if the subjects are related and it flirts with hate.

⦁ Pity is normally associated with sympathy – but not always.
⦁ Nervous is sometimes interchanged with worry.
⦁ The action emotions are not normal actions. They are emotional actions. They do not exist in time or space. 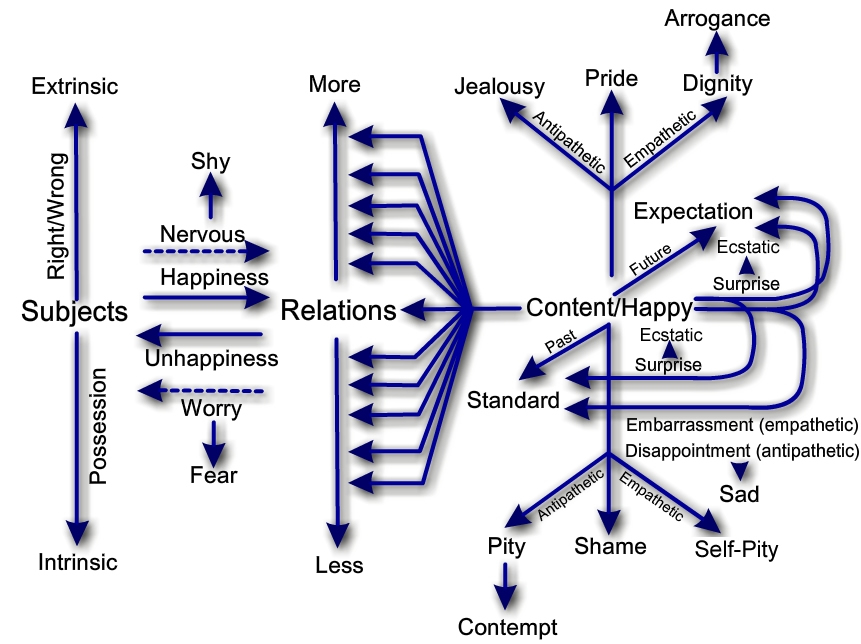